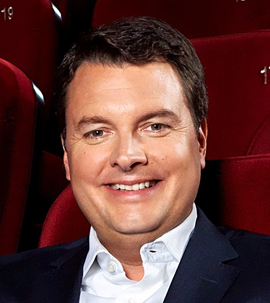 Christof Papousek joined the Constantin Film & Cineplexx group of companies in 1999, after working as consultant. In 2004, he became managing director & CFO and in 2008 he co-founded the group’s international cinema operation – Cineplexx International – as entrepreneur and co-shareholder. Since 2008 the company has developed and acquired 25 cinemas in the SEE region in 11 different countries, including the latest market entrance in Romania. At the same time, premium large format concepts were introduced in the Austrian home market, but also a process of refurbishment and implementation of a new corporate design has been executed.
Cineplexx is an important partner of shopping mall operators and a reliable and sustainable part of the entertainment offer in real estate developments. Since 2018 he is also shareholder in the Group-Holding  entity Constantin-Film-Holding GmbH. Christof Papousek also fulfils several functions in the Austrian chamber of commerce, representing the film and cinema industry as well as in the European Cinema Association UNIC and in the GCF.