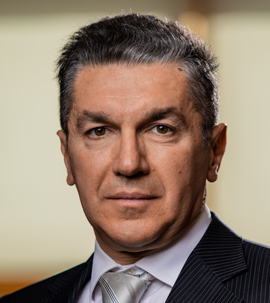 A law graduate, with a bar exam, Predrag began his rich career in 1992 in the PE PTT traffic "Serbia". Since 1997, he has been employed in the telecommunications company "Telekom Srbija" a.d. in which he remained until January 2001. After the experience gained in telecommunication companies, he moved to banking, first to Zepter Bank, where he was the head of the legal, personnel and general services until 2003. He then transferred to the then Societe Generale Yugoslav Bank a.d. in which he remains a legal advisor until 2007. That year, he moved to the position of Director of the Legal Affairs Department of Banca Intesa Belgrade a.d. which he will remain until he joins the Association of Serbian Banks in December 2013.
Important legal affairs in which he participated include work on the contract for the purchase and sale of shares of “Telekom Srbija” in 1997, loan agreements with KfW Frankfurt in 2001, various cross border agreements for the banking industry throughout his banking career, the establishment of companies for financial leasing, participation in the establishment of an investment fund management company, defining the legal aspects of factoring business, mergers and acquisitions of banks, etc. His extensive experience includes managing the legal sector with four services and 40 employees, forming and obtaining a license for payment system operators, organizing seminars and conferences, as well as drafting and presenting numerous professional papers.